I rarely watch a show as it airs, but I’m making an exception for Outlander. I’ve really enjoyed this series by Diana Gabaldon and am eager to follow the TV adaptation. Since I’m both excited and opinionated, I thought I’d share my thoughts after each episode. This will be a running commentary, so I’d expect some spoilers. With that in mind, I’ll plan on doing these posts on the Thursday afternoon after the episode has aired, giving a fair amount of time to watch before reading. I’m not a professional television reviewer or critiquer by any means, so know that all views come from a book worm enjoying one of her favorite series coming to life on the screen. Enjoy & feel free to weigh in 🙂

Overall thoughts about “The Reckoning”

I felt that, while “The Reckoning” was good, it didn’t have quite that wow factor the last few episodes have had, which is a bit disappointing for a mid-season premiere. But maybe I was just too excited for its return? There was definitely a lot of good in it and this episode promises great things in the remainder of the season.

The Nitty-Gritty on “The Reckoning”

I was excited when this episode started from Jamie’s point of view – what a great way to show us what happened while Claire was in Black Jack Randall’s custody! This was a great episode to do it that way – there’s so much going on that Claire is not yet privy to and wouldn’t fully understand yet. 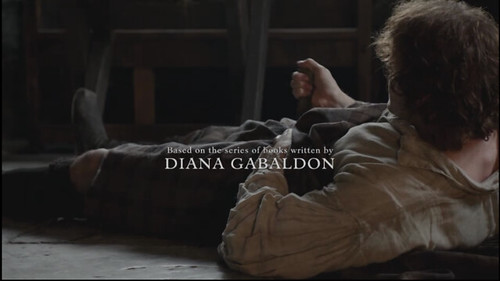 One of the treats of getting this from Jamie’s perspective! A small detail, but I just loved seeing how they put the kilt on laying down. It’s something I’ve wanted to see for a while.

And then we have the daring rescue! How great was that? Again, I’m glad we got it from Jamie’s perspective – how much we would have missed otherwise! I continue to love every scene involving Tobias Menzies- so what a treat to get him with both Cait and Sam. Now I don’t remember the rescue from the book, but I don’t remember the clever unloaded pistol trick. Do you? I would really love to know if someone remembers!

I appreciated several of Jamie’s lines in this episode – they spoke so truly to the man I loved in the books. For example at this moment:

It never occured to me to kill a helpless man, even one such as Randall.

My favorite moment from the rescue: 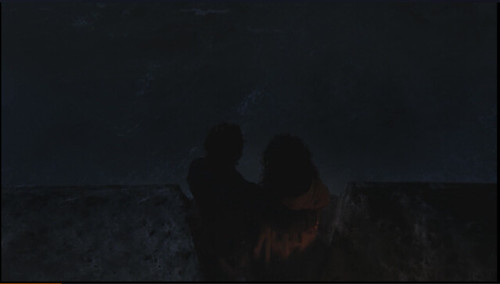 “You are sure there’s water down there aren’t you?”
“Aye, I think so!”
And they jump! Yikes! That’s what I call a leap of faith!

After that rescue, you’d think they’d be so relieved to be alive and okay. Instead, let the fighting begin :/ I knew this was coming because of the book, except that their fight didn’t seem quite as relevant to me as it did in the book. Claire’s wondering off was so slight the way they portrayed it, unlike in the book when she acted so stupidly and actually went a day’s journey away. I do think that Claire was a bit too obstinate though – he just risked his life to save her and she’s not apologetic or appreciative, she’s going off at the mouth. Even if I can appreciate the anger at being expected to be the obedient wife. Wouldn’t have worked for me either. But still, SOME appreciation would have been appropriate.

“I went to ye at Fort William, armed with an empty pistol and my bare hands. When you screamed…Ye’re tearing my guts out, Claire.”

The man risked his life and he has to spell it out for you before you apologize? But at least we got a great Jamie moment out of it 🙂

She asked forgiveness and I gave it. But the truth is, I’d forgiven everything she’d done and everything she could do long before that day. For me, that was no choice. That was falling in love.

So Jamie! *sigh* You’ll notice a lot more quoting when we’re getting things from his point of view ;

And then we have the infamous spanking scene! I wondered if they’d do it, since (as I’ve already said) I didn’t feel her transgression was as real in this version of events. But I do think they did a good job setting it up as a legitimate consequence within their world setting. I know a lot of readers had a problem with this in the book, but I never did, because I see it as a very realistic representation of this time and world. Except that Jamie is actually much more understanding than many husbands probably would have been. I personally loved the way Sam and Cait acted the scene out – Claire fought something fierce! And Jamie’s – “I dinna ken what’s a sadist. As for my pleasure, I said I was gonna punish you. I didna say I wasna gonna enjoy it.” – made me laugh and gave it a very BDSM feel (minus Claire’s mutual enjoyment & acceptance, of course).

I think the return to Castle Leoch is what made having this episode from Jamie’s point of view a real treat. I loved having all the behind the scenes information with Colin and Dougal. I liked seeing Colin’s strength and a Dougal’s treachery more clearly. It really gives us a better sense of how potentially explosive things were. And seeing Laoghaire esponse makes future developments even more clear than they were in the book. For those who haven’t read the book – you think this is going to end well?! 😉 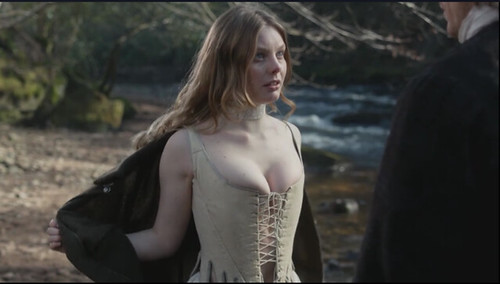 Goodness, she did throw herself at him, didn’t she?

This second half did drag for me, though. The tension between Claire and Jamie was annoying and I would have gladly shortened their make-up sex scene for a bit more forward progression in the story. I rolled my eyes at Jamie’s dramatic display of, what? FEALTY to Claire? Was that in the book? I love the sweet things Jamie says, but in my mind he’s always been a bit more alpha than that. I may have just imagined that because I like my men more alpha… respect Claire, but don’t whimper at her feet :/

My final thoughts on “The Reckoning”

For a mid-season opener, “The Reckoning” was enjoyable, even if it wasn’t all I hoped for. I like how well setup we are for some excitement, especially where Laoghaire is concerned and Duke Sandringham’s imminent arrival. And a long ways down the road, for the Pairs phase. I’m really excited for what’s to come!

What did you think of “The Reckoning”?