Link up your COYER reviews here.

It’s the Finals of the 2014 Book of the Year Challenge, hosted by Erratic Project Junkie! Only one book remains and it’s time to crown the champion!

I pretty much knew who the winner would be after the semi-finals, but I did still think about it for a few minutes. But the same reasoning that brought this book all the way to the semi-finals pretty much secured it’s place as the champion. You ready to see my winner? 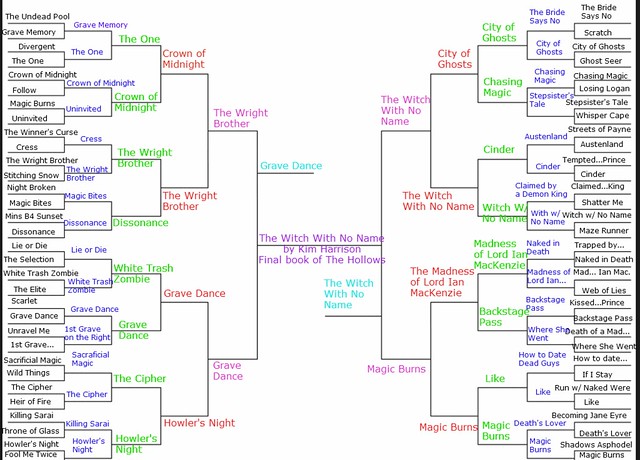 Surprised? Me either, really. It became a competition between a new and an old love and while I wouldn’t be surprised if future books in the Alex Craft series (if there are any… please let there be more) end up taking a Book of the Year prize, this year belongs to The Hollows. It was the end of a favorite series and lucky me – I got to meet Kim Harrison and her husband “Guy” twice this past year and get lots of signed books.

Rachel Morgan's come a long way from the clutzy runner of Dead Witch Walking. She's faced vampires and werewolves, banshees, witches, and soul-eating demons. She's crossed worlds, channeled gods, and accepted her place as a day-walking demon. She's lost friends and lovers and family, and an old enemy has become something much more.

But power demands responsibility, and world-changers must always pay a price. That time is now.

To save Ivy's soul and the rest of the living vampires, to keep the demonic ever after and our own world from destruction, Rachel Morgan will risk everything.

This has been an absolute blast and I hope to do this again next year! It’s a great way to revisit your favorite books and think about some beloved characters. Hop on over & check out the other winners!

What do you think the finas? Have you read The Witch With No Name?

Statements and opinions expressed in reviews, discussions, and posts on this blog are those of Fantasy is More Fun, unless otherwise stated. Authors, Publishers and Tour guides may send me an ARC or finished copy in exchange for my unbiased review. All reviews will state the source. Opinions shared by others in comments may not reflect my own views. I reserve the right to moderate comments. Purchases made through buy links help to support this blog.
%d bloggers like this: