The fountain in the Lobby was one of many things proclaiming to Dallas that the RT15 Booklovers had arrived!

This post is incredibly overdue, but what can I say? Life’s been busy and I knew it would take me a while to put together. Especially since I took over 120 pictures during #RT15. What can I say? I didn’t want to miss a thing! I’ve decided to do a day-by-day recap, keeping it to the highlights to the best of my ability so this post isn’t a book. But I had such an amazing time, I just want to share everything with y’all! Let’s get started shall we?

So technically things didn’t get really started until Wednesday, but for me the thrills started on Monday when Lexxie @ (un)conventional book views arrived from Switzerland! Felicia (Geeky Bloggers Book Blog) met up at the hotel bar around 5pm to await Lexxie’s arrival. This would be the start of many, many hours in the hotel bar BTW. I don’t even want to think about how much I spent in that bar. Just saying…

When I arrived, Felica was chatting with an author that had also arrived for RT – I don’t believe they knew each other before then (right Felicia?), but from that point on Julia Sykes (website) was just part of the gang. We actually still chat and I’m hoping she’ll let me pick her brain as I work on self-publishing, but that’s another segment altogether.

Anyway, after Lexxie finally arrived (6:30 I think?) we went out to dinner and had sushi at a restaurant where Felicia’s brother works. 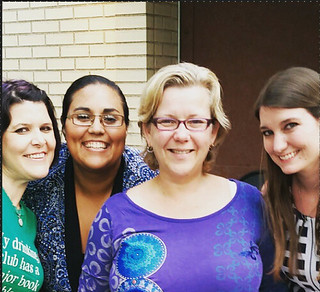 From left: Felicia, Me, Lexxie, and Julia after eating sushi :)

The perfect start to the convention!

I started Tuesday with really good intentions. I woke up, did some school work, went to the gym and then abandoned all efforts and joined Lexxie at the hotel. We went and got our goodie bags and then we ran up to the bar to go through them and chat. I think we drank for a while and Julia joined us again (like I said, she was part of the gang from Monday on). While we were in the bar, Lexxie got a message from Brandee (Bookworm Brandee) that she was checking in. We ran down the escalators and jumped on her while she tried to check-in. Technically Brandee and I made eye contact before her and Lexxie, but I directed her to Lexxie, because I knew those two had been waiting to meet for YEARS! I feel very privileged to witness that first meeting. And then I got my hugs in, of course!

Brandee arrived with her friend Denise and they headed up to the room to get settled and then joined us… yep, at the bar! 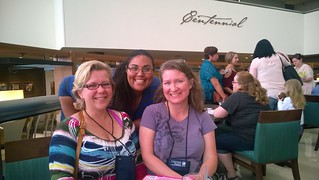 Lexxie, Me, and Brandee shortly after Brandee arrived at the bar.

We hung out there for a while and then a local bookclub friend of mine – Wendy – Denise and I went to this fun scrapbooking event. It was a ton of fun and I’m going to use some of what I got there for a large scrapbook I plan on making from the whole event. 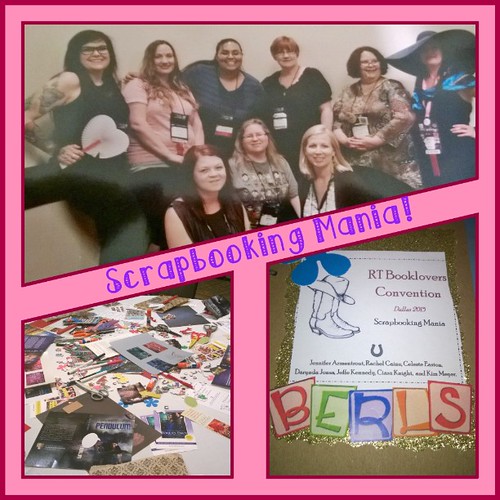 Top picture – All the authors at the scrapbooking event, me, and my friend Wendy; Bottom left – some of the goodies they gave us to scrapbook with; Bottom right – The cover I made for my scrapbook

After the scrapbooking was the infamous Cinema Craptastique! I had heard about this being an awesome time and they weren’t kidding! Damon Suede, who I hadn’t heard of before then but have now purchased one of his books, hosted a viewing of The Legend of Hercules while he made fun of the movie and made us laugh our asses off. I think those of use that were there will always share a fun giggle at some of his favorite lines (upskirt & slowmo were two of my favorites). If you ever go to RT don’t miss this fun time. My time was made even more fun because I sat next to Felicia who as determined to get first place on the #RTCC twitter board. I spent some time tweeting for her and it was hilarious fun, even though she got stuck in twitter jail and didn’t win

Oh but I won a cool hat in the raffle! 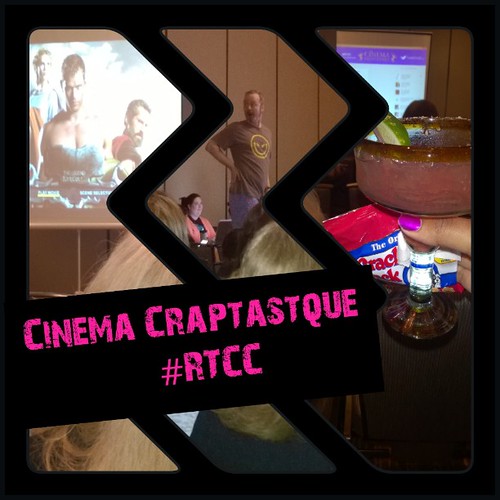 Far left: The Movie Screen; Middle: Damon Suede, after stripping down to his boxers; Far Right: My dinner – a margarita and cracker jacks

By time that was over, I was really tired. But I had to go to the NA College Night because 1 – there was more substantial food to follow up all that drinking I’d been doing and 2 – Colleen Hoover was supposed to be there. While I went and gobbled up some nachos Lexxie actually found Colleen. I followed her out of the ballroom and she disappeared. So I waited by the door for her to return… not stalkerish at all, right? Then she walked right past me and I followed her again. And waited patiently while she talked to fans she actually knew. Lexxie watched me and practically pushed me into Colleen. When I finally got to meet her, I very eloquently said, “Oh My God, you’re Colleen Hoover!” I got much more eloquent with fan moments as the week progressed… sort of! More on that later. She responded, “Oh my god, I am.” Yeah, I laughed and, feeling embarassed for being such a fan girl, practically shoved my book at her to sign and asked her to take a picture with me, which of course she did. It wasn’t until later when I went through my books that I saw how she signed my book: 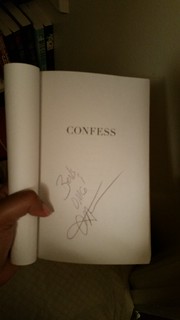 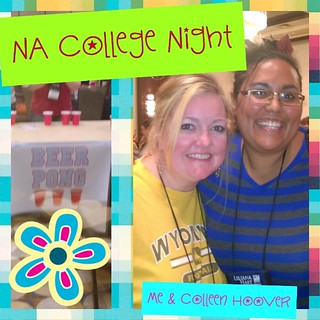 After that, I left the party and went up to… yes, you guessed it, the bar… to say goodbye to everyone. On my way up the escalators, someone going down the escalators called my name and waved. I waved back, but was so tired I didn’t make a connection to who they were. Thankfully she- Melanie (Hot Listens and Rabid Reads) – got on the up escalator and hunted me down. Once I really saw her I squealed and got in a hug. And then I said goodbye, because I still had to drive home and was tired. That night they had more fun after I left, but being local has a disadvantage – you need to leave when you’re still capable of driving.

And I was so tired already, at the end of day 2 of the Preconvention! You can only imagine how tired I was by the end! But more on that in a future post – hopefully coming tomorrow

Statements and opinions expressed in reviews, discussions, and posts on this blog are those of Fantasy is More Fun, unless otherwise stated. Authors, Publishers and Tour guides may send me an ARC or finished copy in exchange for my unbiased review. All reviews will state the source. Opinions shared by others in comments may not reflect my own views. I reserve the right to moderate comments. Purchases made through buy links help to support this blog.
%d bloggers like this: