I rarely watch a show as it airs, but I’m making an exception for Outlander. I’ve really enjoyed this series by Diana Gabaldon and am eager to follow this series. Since I’m both excited and opinionated, I thought I’d share my thoughts after each episode. This will be a running commentary, so I’d expect some spoilers. With that in mind, I’ll plan on doing these posts on the Thursday afternoon after the episode has aired, giving a fair amount of time to watch before reading. I’m not a professional television reviewer or critique by any means, so know that all views come from a book worm enjoying one of her favorite series coming to life on the screen. Enjoy & feel free to weigh in 🙂

Episode Synopsis: In the series premiere of this cable drama, a married British combat nurse time-travels from World War II to 1743 Scotland, is kidnapped by Highlanders and tends to an injured young warrior.
Original Air Date: Aug 9, 2014
Length: 1 hour 4 minutes

To start with, all said and done, I totally loved this episode. It lived up to the book in so many ways. I love they way they are portraying Claire, Frank, Black Jack, and of course Jamie. I think they’re doing Scotland proud, giving us incredible views of the scenery. It’s breathtaking. The use of language is fantastic. It has everything that I loved about reading Outlander.

The Nitty-Gritty on “Sassenach”

However, “Sassenach” got off to an surprisingly boring start for me. We open up with Claire staring into a store front, looking at a vase and thinking about how she would like to own it. I think this was supposed to be a poignant moment about the choices we make and how, no matter how much Claire wanted one life, she’s happy with the life she ends up with too. Or something like that. For me, it just felt like a very awkward start. Maybe I was too excited, I don’t know.

This boring moment was only made more boring by the music and voice-over. If I were to have only one complaint, Claire’s voice-over would be it. I felt like it was often unnecessary and disrupted what was often otherwise a good scene. I don’t like having everything explained to me – it took away the opportunity to form your own opinions and interpretations. Show me, don’t tell me. Isn’t that supposed to be one of the great advantages of film, after all?

So the first 38 minutes take place in 1945 Scotland and had a very halting pace. Lots of voice-over and strained back and forth between Claire and Frank. I think the awkwardness between Claire and Frank was on purpose and made lots of sense – they are a couple reunited after 5 years apart and changed by their war experiences – but it does make it difficult introduction to the series. I think that it shows how much Starz is banking on fans watching. Would you have been sucked in if you hadn’t known what was coming? I wouldn’t have. Their second honeymoon – though sweet and sexy enough – doesn’t make for a gripping tale. To be fair, I remember this being the part of the book that I wasn’t particularly engaged either. If it hadn’t been for high hopes, I don’t know if I would have made it to the good part of the book either.

There were some moments I really enjoyed in the first half of the episode, though. For one, it was neat being shown details that we would later see again, but completely different in the 18th century instead. I liked the moment with the reading the tea leaves and the scene with the Druid women at the standing stones was absolutely beautiful. 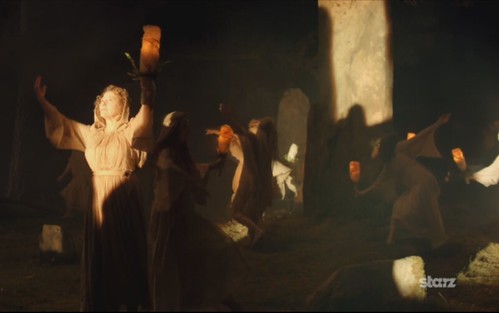 The Druid Women at the standing stones was stunning.

A particularly great scene is the haunting moment where we see the ghost. It was done well and was a nice direct adaptation of the book (although I don’t remember the rain). And, while their relationship is somewhat awkward, the sex scenes between Claire and Frank worked for me. For one, they established Claire as a modern woman (even more modern than we would expect considering that this is 1945… I mean that scene in Castle Leoch? Tell me you weren’t surprised by that?) and they also show us that Claire loves her husband and hopes to have a future with him. Too bad we had a voice over telling us that they used sex to connect, because I kind of was already getting that and the voice over made it feel cheaper somehow :/

The moment where Claire passed through the stones was very disappointing for me and was, IMHO, a wasted opportunity. Instead of giving us this very awkward slow-motion car accident (again accompanied by that annoying voice-over), why not take full advantage of the visual medium to show us what we’ve always been curious about? At least, I’ve been so curious about this moment – what did it look and feel like? To me, this felt like a cop-out.

Thankfully they don’t make us wait until the second episode to get to the REALLY GOOD stuff. Once we hit the 18th century (at 39:22/1:04), Sassenach (the episode and Claire) was off and running. If only those voice-overs had stopped, it would have been perfect! I can’t believe I’m saying this – but it was like they were trying to be TOO FAITHFUL to the book through those voice-overs.

The moment Claire stumbles upon Black Jack is fantastic and I loved seeing her cussing up a storm. The actor who plays Frank & Captain Jack (Tobias Menzies) did a fantastic job – I had no trouble believing he was two different people with the same face.

I loved Claire’s “rescue” and they way they had the men speaking Gaelic without giving us any interpretation. Talk about really showing us how out of place she must have felt. Once again – and I’m sorry to beat a dead horse – but the voice-overs were really too much. For example we get a voice-over telling us that she “decided to keep using her maiden name” just before she says that her name is Claire Beauchamp. Now, even if you haven’t read the books, you know her last name is not Beauchamp, but Randall. That has been established. Sure, you don’t know that Beauchamp is her maiden name, but was that necessary information? Because it really disrupts the flow of the scene IMHO.

Claire’s interactions with Jamie are fantastic from the get-go. I can see why everyone in the production stages said that these two actors (Caitriona Balfe & Sam Heughan) BECAME Claire and Jamie – perfect casting! 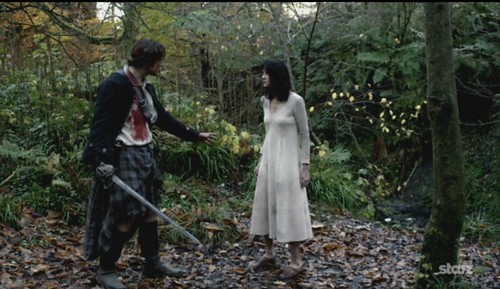 This was a great moment! Claire is so spunky and the chemistry between her and Jamie is right on!

And I loved the action and seeing the same sights we saw earlier in the 1940s again in this new setting. And her having to adapt to this new environment- particularly as a nurse – was done well, with Claire’s own brand of hilarious mouthing off. I don’t think Cait has completely nailed the Jesus H. Roosevelt Christ yet, but maybe it’s just going to sound awkward because who says that nowadays?

My final thoughts on “Sassenach”

If the last 25 minutes of “Sassenach” are what we can expect from the rest of the season, I’m thrilled. It got off to a slow start, but one I can readily forgive.

Do you agree with me? Who else is ready for the next episode NOW?