I rarely watch a show as it airs, but I’m making an exception for Outlander. I’ve really enjoyed this series by Diana Gabaldon and am eager to follow the television adaptation. Since I’m both excited and opinionated, I thought I’d share my thoughts after each episode. This will be a running commentary, so I’d expect some spoilers. With that in mind, I’ll plan on doing these posts on the Thursday afternoon after the episode has aired, giving a fair amount of time to watch before reading. I’m not a professional television reviewer or critiquer by any means, so know that all views come from a bookworm enjoying one of her favorite series coming to life on the screen. Enjoy & feel free to weigh in 🙂

Episode Synopsis: Claire is introduced to the laird, but suspicions about her grow as she makes a friend of the mysterious Geillis Duncan and the clan discovers her skills at healing.
Original Air Date: Aug 16, 2014
Length: 1 hour 1 minute

I thought “Castle Leoch” was even better than “Sassenach”! I think I’m happy that I read the book over a year ago and can’t remember the exact sequence of events and details, because there are things that I’m pretty sure are off. But they aren’t significant enough to really bother me. I love the way characters are coming to life and am really enjoying watching the show. I even watched it two times!

The Nitty-Gritty on “Castle Leoch”

I don’t think I’ve mentioned how much I freaking love the intro song and I just had to say something about it now. I don’t watch the show live but on Starz Play. Typically when I watch shows this way, I fast forward through intro songs, but I could listen to this one over and over!

I about groaned when the first thing we hear in this episode was Claire’s voice-over! I’m still not a fan of it and find it mostly unnecessary – even for Outlander Newbies – but there was a lot less of it in this episode and it bothered me a lot less. I suspect I may even grow used to it before the season is over.

That voice-over – easily the thing I liked least so far – quickly faded away into what I loved most about this episode. It was so much fun just watching the people interacting and living their lives in their natural element. I know this might have led to a slower pace overall for the episode but it lended it such a great quality that I have no complaints what-so-ever about the pacing.

This moment with Mrs. Fitz(gibbons) is one my favorites. I love this character even more than I remember loving her in the book – Annette Badland has done a great job with her!

Here Dougal is playing with young Hamish and I thought it was such a sweet scene. About the only time I liked Dugal in this episode, but Graham McTavish is doing a fantastic job with his character as well!

I’m absolutely thrilled they didn’t skip these for the sake of drama and action! There will be plenty of that in it’s own time.

Another element I really enjoyed were the moments where they’d flash back to when Claire and Frank has passed through the same spot in Castle Leoch. In fact, I liked the attention to Frank in general – I think it’s helping to reinforce a very important element to the series – Claire loves Frank and is very worried about not only getting back to him, but about how her absence is impacting him. I thought they’d handled this really well.

I hate that I’m saying this, but I’m not exactly feeling the connection between Jamie and Claire in this episode. It wasn’t bad by any means – it just wasn’t as sizzling as it already had been in the first episode. I think, for me, this my be a result of my distraction by a few things. One – I keep asking, “did he really tell her all that now?” I’ve only read the book once and a year ago, so the details of when things happened is a bit fuzzy, but I’m feeling like his revelations are a bit earlier than I had expected. And two – what is up with Jamie’s hair? LOL I read somewhere (I can’t remember or I’d totally give credit) that it was like Hobbit hair and I agree! I love Sam Heughan as Jamie though – he’s nailed him for me.

And I’m still really liking Caitriona Balfe as Claire – particularly in the moments where she tells off Dougal and Colum. And when she trapped herself at dinner – that was a great scene. My BF said “And that’s why you don’t say things when you don’t know.” LOL! That’s a moment I’m almost positive wasn’t in the book, but was really great.

But more than anything, this episode was about relishing in the details for me. They’ve done some visually stunning things – the landscape is gorgeous, of course. They’re showing us people at work, going about the running of Castle Leoch – whether it’s in the kitchen or outside on the grounds. And then there’s the gruesome things. Am I the only one who gasped when we saw Jamie’s scars? I mean, I knew they were there, but holy shit! Awesome job. Similarly with the holding of court – that was great! I loved that they didn’t translate for us, anymore than Geillis Duncan – who I’m also loving BTW – translated for Claire. 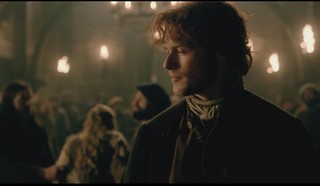 Jamie stepping in to take the punishment for Laoghaire. They captured the brutality of this beating well. 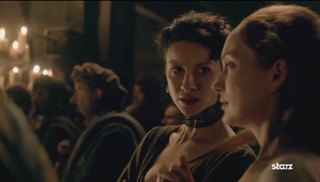 Claire looking on in horror and Geilleis holds her back. Am I the only one who doesn’t remember Dougal being so obviously villainous? I’m enjoying his portrayal though!

And the clothing! I love not only that they look so authentic (not that I actually know, but they sure feel it) but you get to see little details about how they were worn. And how many clothes women wore. In the scene where Claire was getting dressed my BF said, “Geez! That’s like too many clothes!?” My favorite part of that scene was when Mrs. Fitz asks “What kind of corset is that?” I laughed my ass off at her confused expression.

They ended the episode at a great moment, with Claire realizing that she will not get back the standing stones or Frank anytime soon. As I told my mom (when I watched it my second time), they sure now when to end these epsiodes!

My final thoughts on “Castle Leoch”

So pretty much, this episode is a love fest for me. A few things felt different than I remembered them, but not really in a bad way, just different. The pacing was mostly slow, but it didn’t bother or bore me in the slightest. I wonder if those who haven’t read the books are enjoying the details as much as I am?

What did you think of “Castle Leoch”? Where do you think the next episode will take us?